Ernest Rutherford (1871-1937) was born in New Zealand to James and Martha Rutherford. He had a quiet childhood complemented by a better education than most kids living in the New Zealand countryside. In 1887 Rutherford won a scholarship to Nelson Collegiate School – at that time it was the only scholarship available to help students attend secondary school.

In 1889 he was awarded a University scholarship and he proceeded to the University of New Zealand, Wellington, where he entered Canterbury College. He, “graduated M.A. in 1893 with a double first in Mathematics and Physical Science and he continued with research work at the College for a short time, receiving the B.Sc. degree the following year” (link).

In 1894, Rutherford was awarded Exhibition Science Scholarship which helped him to attend Trinity College, Cambridge, as a research student at the Cavendish Laboratory under J.J. Thomson. In 1897 he was awarded the B.A. Research Degree and the Coutts-Trotter Studentship of Trinity College. An opportunity arose in the form of an empty Macdonald Chair of Physics at McGill University, Montreal, Canada.In 1898 he left England to take up the post.

It was in Montreal that Rutherford made the first of many incredible discoveries. There, he identified a new noble gas: radon in an isotopic form. This isotope was later named thoron. His work alongside Frederick Soddy helped to identify new radioactive substances and changed the way scientists thought about nuclear degradation. He also produced influential work concerning alpha rays, which was continued when he returned to England.

Rutherford returned to England in 1907 to teach at the University of Manchester. In conjunction with H. Geiger, they created a way to count the amount of alpha rays emitted from a radioactive substance, in this case radium. In 1910 he proposed the idea of a nucleus- perhaps one of his greatest contributions to chemistry. Working with Niels Bohr. they intercepted the idea of the nucleus with Planck’s quantum theory and drafted an idea of atomic structure. 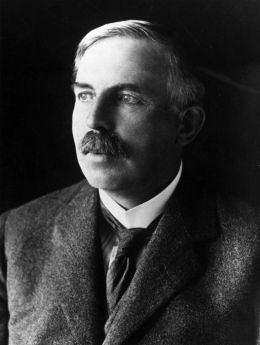 In 1919, he accepted the position of professor of physics at Cambridge.

In 1908 he was awarded a Nobel Prize for “for his investigations into the disintegration of the elements, and the chemistry of radioactive substances“.

Rutherford published several books during his life: Radioactivity (1904); Radioactive Transformations (1906); Radiation from Radioactive Substances, with James Chadwick and C.D. Ellis (1919, 1930); The Electrical Structure of Matter (1926); The Artificial Transmutation of the Elements (1933); and The Newer Alchemy (1937).

He died on October 19th, 1937 from surgical complications. His ashes are buried in Westminster Abbey with many other prominent British scientists.